It was approximately three in the afternoon and I am practically bouncing off the walls waiting for Dean to turn up because we were heading on a little adventure to Birmingham to see one of my all-time favourite bands, Shinedown. He finally arrived around half an hour later, I was not impressed. I did however let him off as he was driving me all the way to Birmingham and back again. We made it about an hour into the journey before we decided to stop for some food. McDonalds had already been thrown into the mix for the trip back, so we decided noodles from a stall in the service station would tide us over for the time being. (I had never noticed before how depressing being in a service station really is, its like real life limbo. Nobody is at their destination, they are always going somewhere or coming back. It’s an interesting atmosphere I can’t imagine wanting to work in one myself.) We made it to the venue in Birmingham and the line to get in was spiraling all over the place, we decided while catching a few fireworks displays from the rooftop of the car park to take a slow walk down and try and join the back of the line. The time passed surprisingly quickly (I suppose that’s the perks of good company.) once we were in all I wanted to know was where the toilets and the bar were.

Beer in hand we headed to the right side of the crowd of people to catch a little bit of Starset before we got ready to see Shinedown. I had never listened to Starset before and was really impressed, there were a couple of songs I fell for instantly and have since been added to the playlist! One of these songs being ‘Monster’ that Dean had told me to keep a listen out for. A few songs later we went out of the crowd for some air and another beer, I knew we had to somehow find our way into the middle of everything for a better view. As I am only little I decided to go first before I knew it we had three or four people on our tail wanting to be our friends. The guys that tagged along behind us must have been in their 50’s if not older and with their wives, it was really pleasant to meet them and really nice to see them on a date at a Shinedown gig. Dean and I noticed so many different types of people of all ages at the gig and it was honestly incredible to see everyone together just there in the moment enjoying some amazing music.

Shinedown Rocked. Although my biased opinion already knew they would smash it, they proved me totally right. I was on cloud nine when we left the venue, it was freezing but I was just in my t-shirt so buzzed and even more excited to see them in two days’ time. 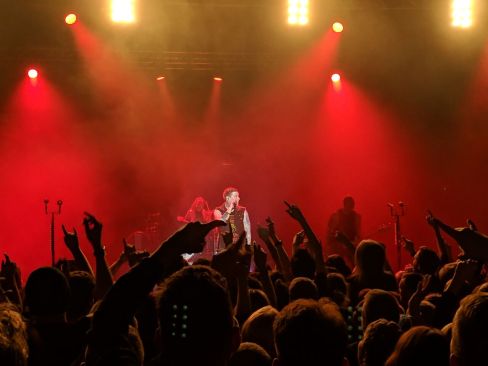 This was the most exciting day of them all because Dean and I had meet and greet tickets for Shinedown themselves. I had to try all day to keep myself totally calm and composed because the inner fangirl was hyped up to the max and ready to explode excitement all over London. We don’t do this very often and I have to give full credit to Dean for getting me the meet and greet tickets and again have to apologise for being a total Muppet and as usual spoiling his surprise for me. (I have a sixth sense for these things and somehow always manage to ruin his surprises, it’s a talent.)

Anyway, moving on. Dean and I ended up having to park at Blackhorse Road as there were a lot of disruptions on the trains due to more strikes. But this meant we only had to get on one train straight to Brixton. We had about half an hour before we had to be at the O2 in Brixton for the meet and greet so we quickly ducked into a spoons for a few cheeky drinks and ended up having chips and onion rings which came to the table minutes before we had to make a mad dash up the road. Thankfully we made it with seconds to spare.

I must admit, meeting Shinedown was honestly one of the best moments of life so far and all still a bit of blur to me. The group of us waiting patiently to meet the band were in a horseshoe shape, Dean and I were more towards the right-hand side of it. When the boys arrived, they split up and started at either end to greet us all! First to us was Brent Smith (wow nothing like easing me into this, just throw me in the deep end.) Brent was lovely he gave me a hug (Yes, I am pretty sure the fangirl in me imploded and pieced itself back together throughout the duration of this cuddle.) After chatting about how good the gig was in Birmingham and how excited we were to see them again tonight Brent complimented my leather jacket and paused as he noticed my Lionel Ritchie t-shirt (yes I must have been the only Muppet at a Shinedown gig in a Lionel Richie t-shirt) Brent was loving it though and went on to tell me about how he met Lionel on a rooftop, I could of honestly sat there rambling to him all day! Second was Zach Myers, it was his birthday so as you do, we wished him a happy birthday (the poor love looked half asleep) and after more ramblings Dean ended up doing some super secret cool high five kick handshake thing with him giving us all a good giggle to say the least. Barry Kerch and Eric Bass came from the other side and just as I had calmed down from meeting Brent and Zach, Eric went in for a proper bear cuddle, trust me I was not complaining. All four boys were so lovely and actually made an effort with us all, it was all round a great experience.

After the meet and greet had finished and they had gone to get ready, we got to be the first bunch into the arena and we got first pick of the merch! (Dean and I both got a tour shirt, now we have to double check before going out that we aren’t clashing.) When we got inside the arena we went straight for beer and pretty much hung out at the front for a while, after seeing the first warm up we decided to hunt down the toilets and find more beer… this soon went horribly wrong and somehow, we were on the shots! What felt like an age later we squeezed our way back to somewhere in the middle of the crowd and danced, sung and thoroughly enjoyed another amazing performance by Shinedown. The best part of the evening was the entire crowd singing Happy Birthday to Zach before they did a cover of Oasis ‘Don’t look back in anger’. The crowd poured their hearts out to this cover and soon after it was all over. The evening was finished, we left London feeling even more buzzed than last time.

Overall London beat Birmingham by so many points and I honestly had the best day I could have possibly imagined! Next time Shinedown tour I will be touring the UK with them because I just can’t get enough. 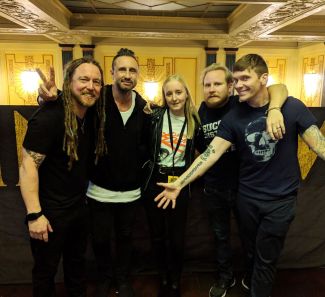 Three Out of Three (we got soaked)

I had actually not been planning to go to this gig as I didn’t have a ticket until Dean and I were sitting in spoons three days earlier. I checked Ticketmaster and ‘Bullet for My Valentine’ tickets were still available, so I bought one then on the spot. I wasn’t ready for Wednesday to be the last gig of the week.

There were four of us this time, Dean (duh), Deans brother Sean (who’s birthday it was), Luke (just Luke) and of course me. The three of us picked Luke up and went up from Harlow station. The clue was in the title, we got soaked on the way to Ally Pally. As soon as we came out of the train station it was tipping it down after just a few minutes walking we had to jump on a bus that took us directly to the venue. I firstly had to pick up my ticket and then secondly, we got even more soaked waiting in the very long line to actually get inside. Half an hour later we were in, beer in hand, I had rung my hair out and stuck my head under the hand dryer for a while. The best thing about Ally Pally is all the amazing food stands, so after a little munching session it was time to go through to the stage. The four of us caught the end of, Of Mice & Men before Bullet made a spectacular entrance. Dean and I had seen BFMV at Download Festival in June and they were just as amazing this time round! They are one band I have just always loved so I was actually so glad I got a ticket last knockings.

Thankfully when we left the venue, we could just jump straight on a bus back to the station and the journey home was a pretty easy one.

It was a great end to a fantastic week, I am so grateful for the excellent company and can’t say thank you to Dean enough for giving me the gift of meeting one of my favorite bands. It was a great way to end the year for gigs, while getting me excited for the six Dean and I already have booked for 2019.

View all posts by Charlotte Malyon